“How will we know when it’s really going off”? my 11-year old niece asked, watching the ground hiss and spurt random streams of hot water six to ten feet high. “Oh, you’ll know”! I smiled. What a delight it is to experience Yellowstone through the eyes of first-time visitors, especially youngsters. It’s like putting on goggles and seeing the sights in new, fresh ways. 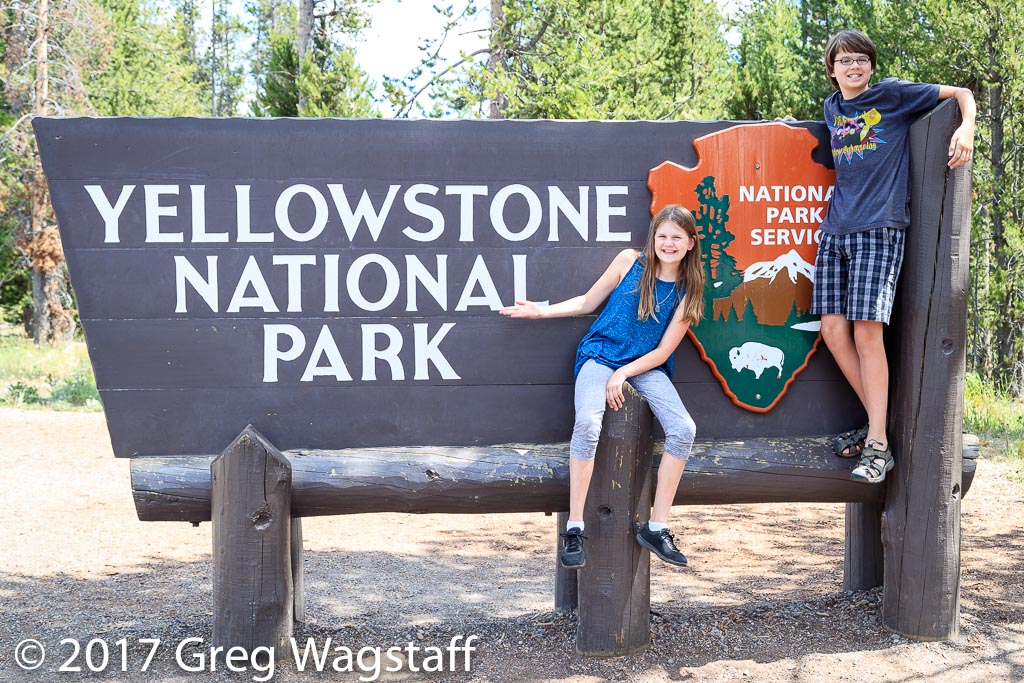 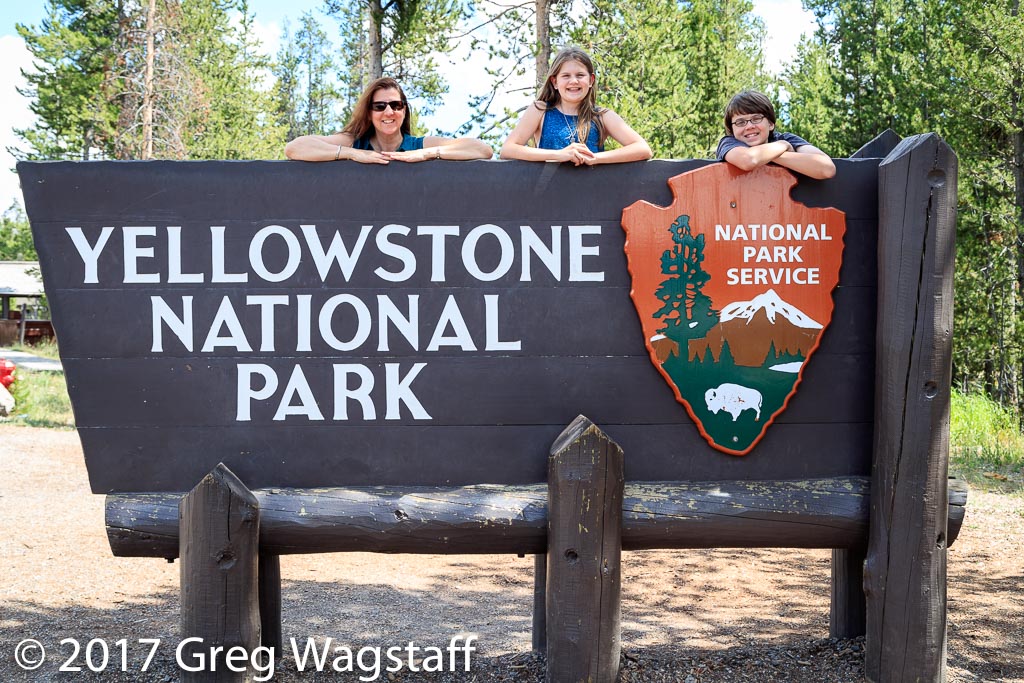 Old Faithful Geyser continued to bubble and steam, teasing the audience with its pre-show antics.  I’ve seen the iconic geyser erupt more times than I can count but, this time, I waited with new-found anticipation — excited to share the experience with my sister Korri, nephew Caden, and niece Aly.  Finally, it burst, blasting scalding water more than 100 feet high in a grand performance lasting several minutes. 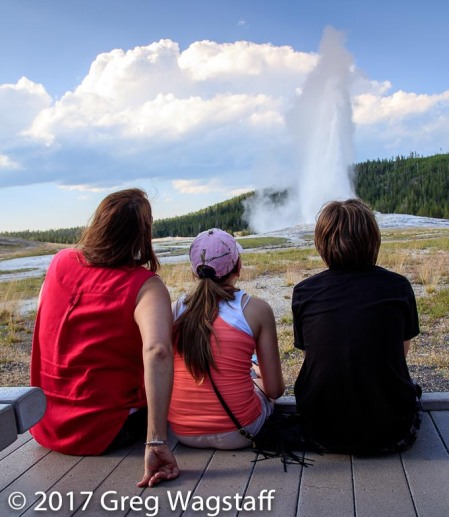 Seeing their smiles and hearing their happy chatter made me smile. 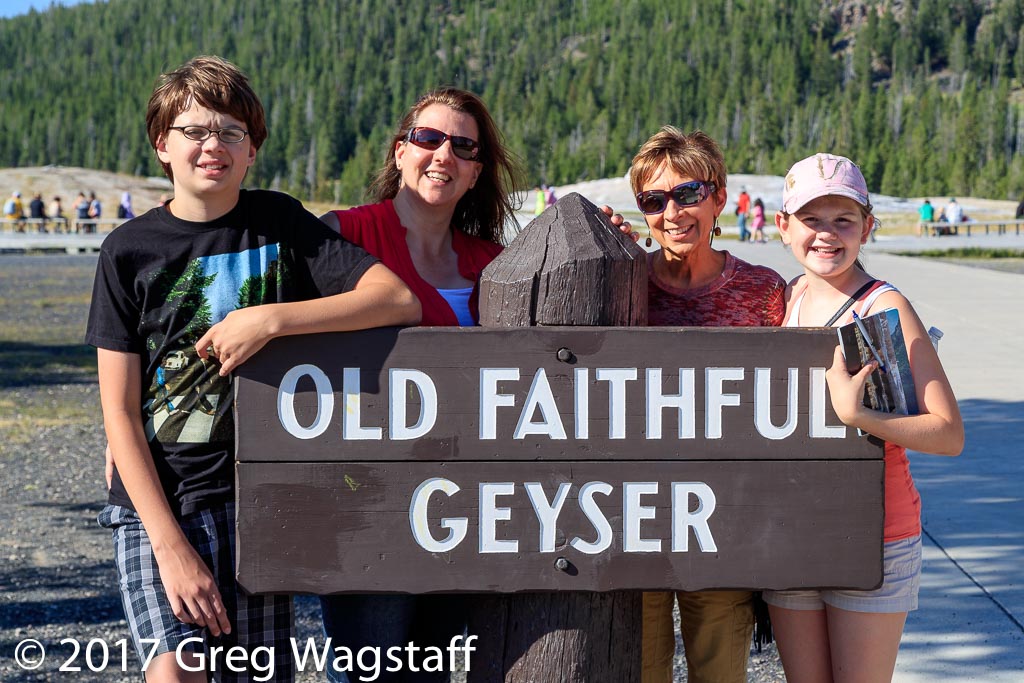 Our adventures began with a bald eagle sighting along the Madison River.  Perched in the pines on the river’s edge away from the road, it would be easy to miss, but Greg, the ultimate tour guide, doesn’t miss much when it comes to wildlife. Traffic streamed by as we stood along the river bank peering at the raptor.

Eventually, a car stopped and we gladly shared our find. A few miles down the road, an elk jam halted traffic.  Vehicles stopped in the middle of the road and camera-faced tourists invaded the meadow despite signs reading: “No stopping or parking along the road”.  There’s something magical about seeing animals in the wild. 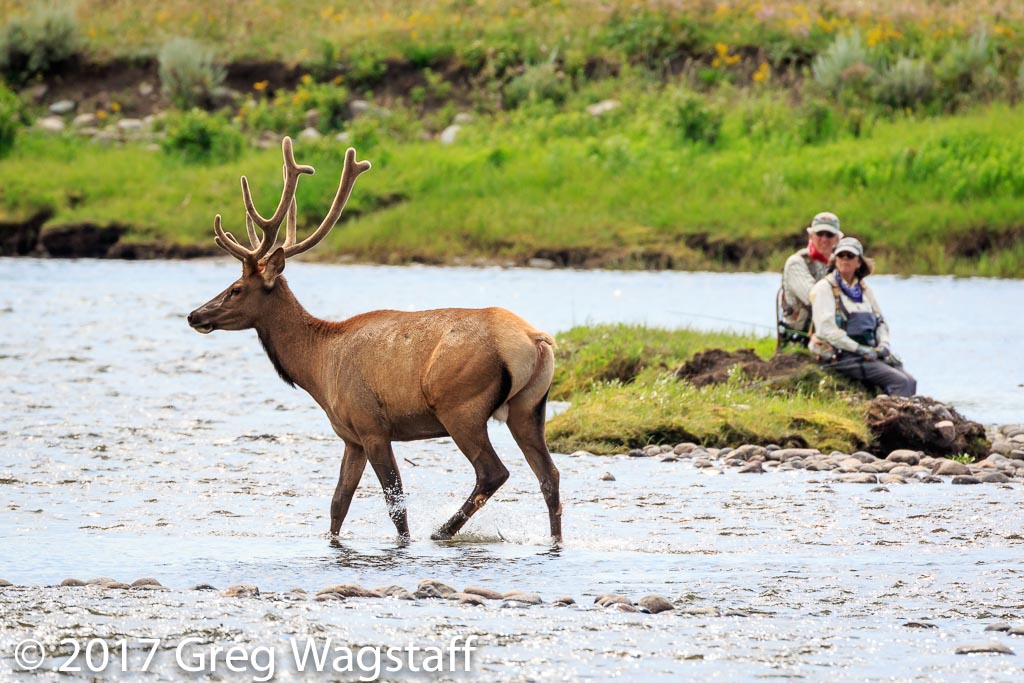 Aly and Caden focused binoculars on the elk herd and I heard one say, “we’ve seen elk before”, to which the other replied softly, “but, these are in the wild, no cages or fences”! 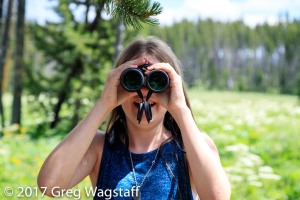 Through their eyes, even bison loomed larger and the typically annoying bison jams became entertaining.  I actually found myself hoping the herd would saunter into the road and clog traffic!  And it did — snorting, galloping, rolling in the dirt and plain old lollygagging past our car.

“It’s like a scene from Jurassic Park”, Caden commented.

Greg pulled into a turnout and we piled out. A bison paddled across the river towards the road, shaking a small pond out of its fur as it emerged before us. Bison dotted the hills and meadows – so many that Aly gave up her tallying. 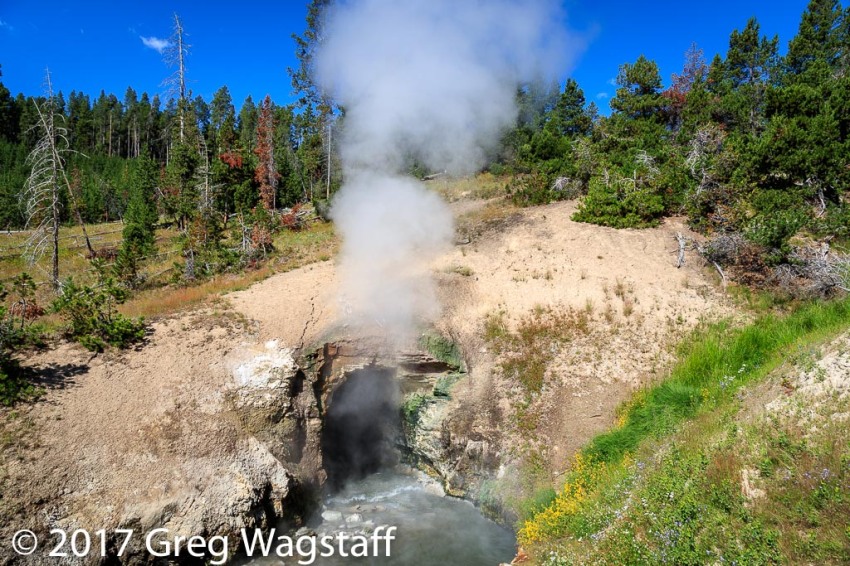 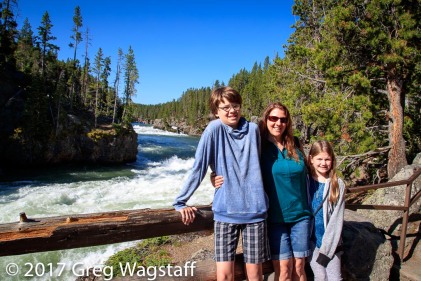 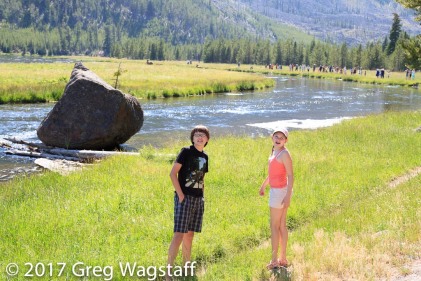 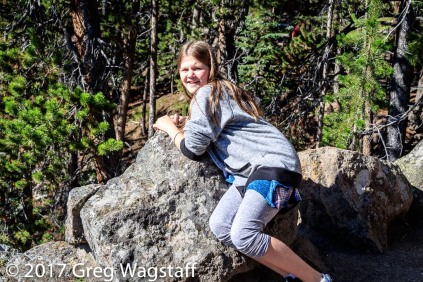 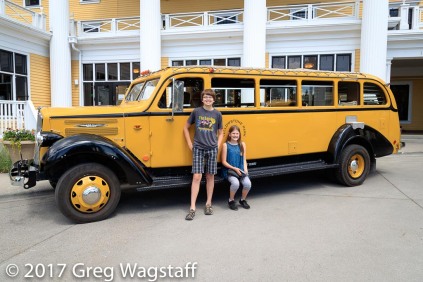 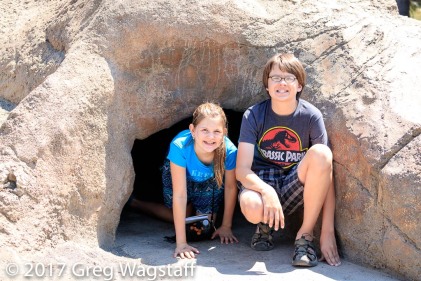 When Greg and Korri stepped out of the car to view some pronghorn, a furry-brown mass scurried past. At first, Greg identified it as a marmot and then it turned and glared at its intruders. It was a badger!  A mama moose and calf, a bull elk sporting velvet antlers, and a black bear rounded out the wildlife sightings.

But, the grizzly, that’s another story. It fixed its attention on the cooler and attacked it — clawing and biting the hinges, tossing it against rocks, wrestling it into the pond and hanging on like a surfer waiting for a wave 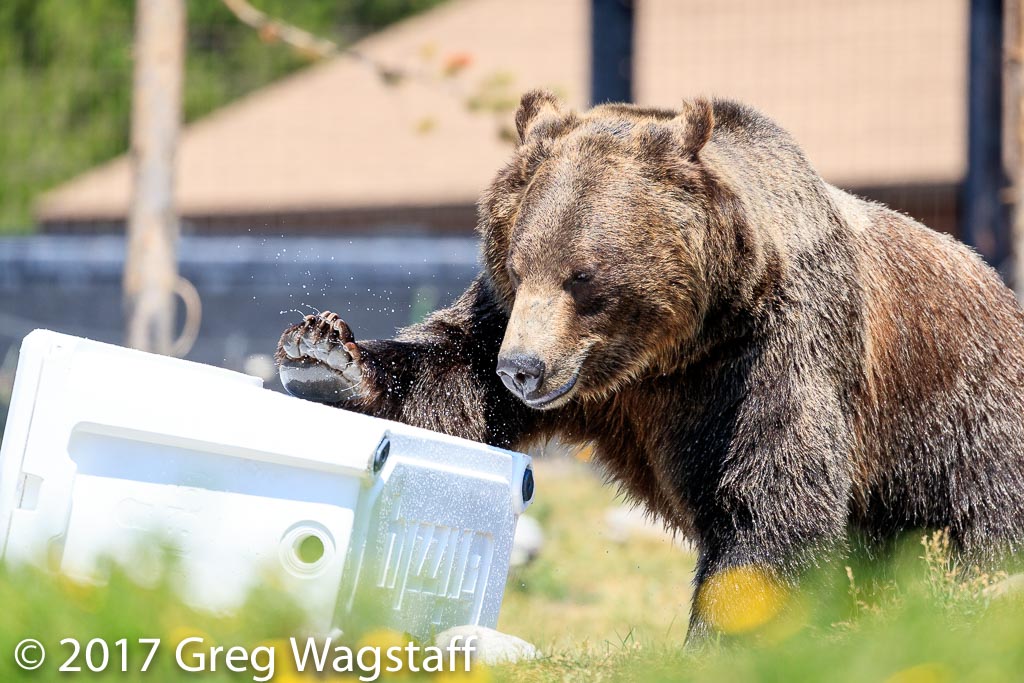 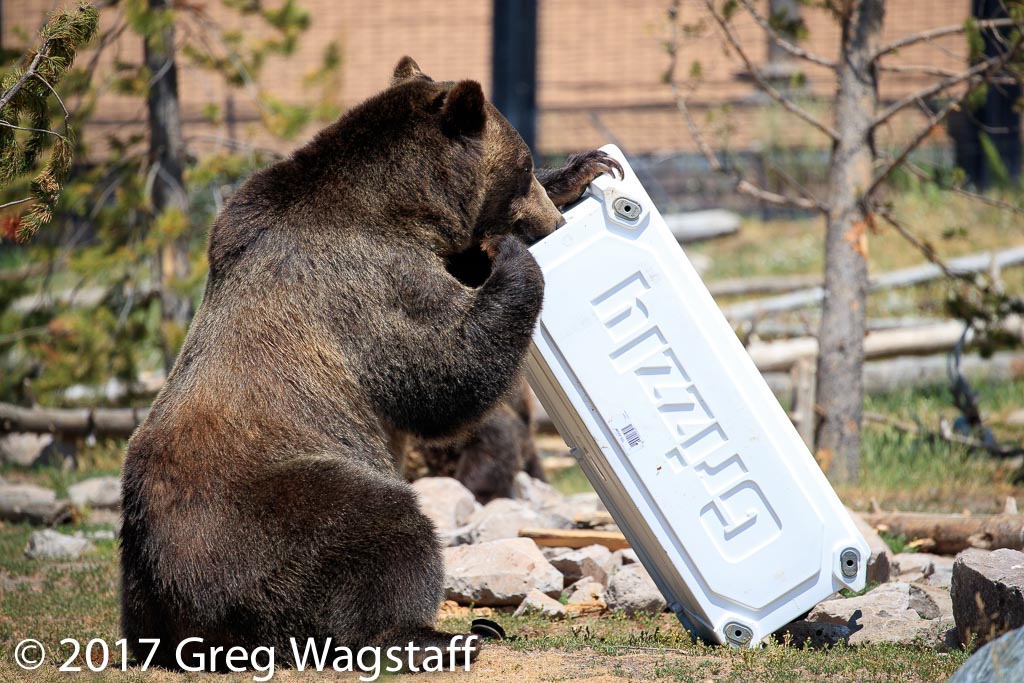 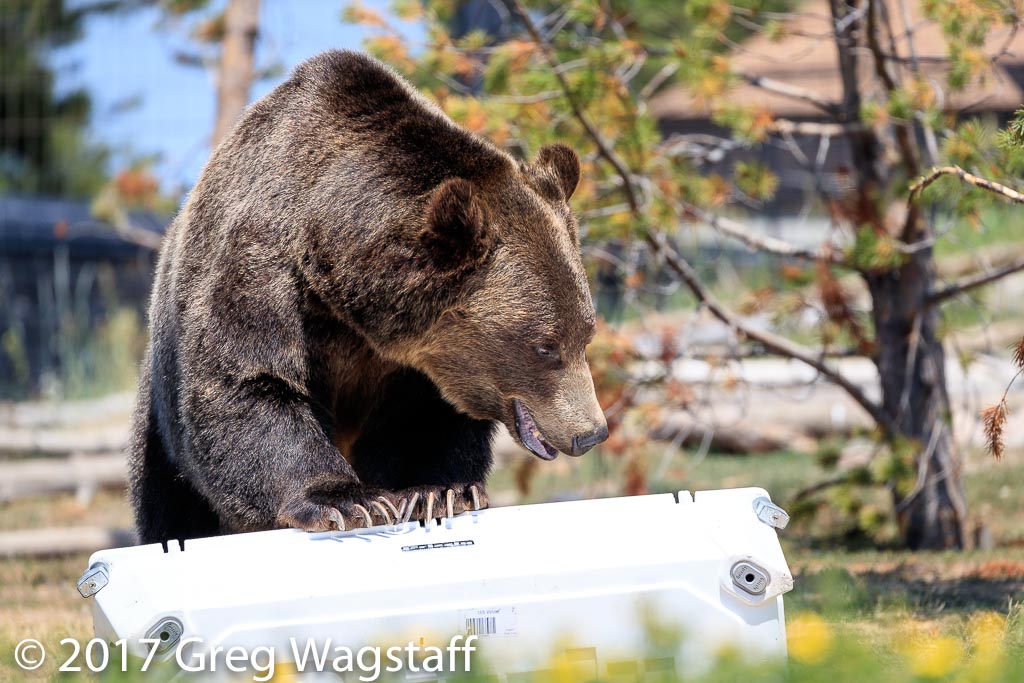 We laughed at the amusing antics, reveling in our good fortune to witness “cooler durability testing” at The Grizzly and Wolf Discovery Center in West Yellowstone, Mont. If the bears can’t break into the cooler, filled with tasty treats, within 60 minutes, it is certified as “bear resistant”.  A display of failed food and garbage containers — the “container graveyard” — is a testament to the grizzlies’ prior achievements.

After days in Yellowstone’s wild kingdom, it was time to work the wild out of the kids. Like a protective Mama Bear, Korri watched Aly and Caden don harnesses, helmets, clips, and various contraptions and head off to flight school. 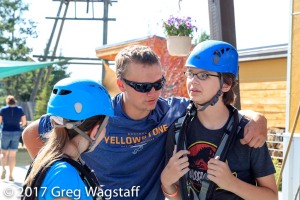 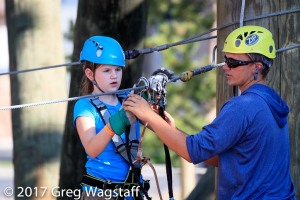 Soon, they were scrambling up ropes, spiderwebs and plank bridges at Yellowstone Aerial Adventures. 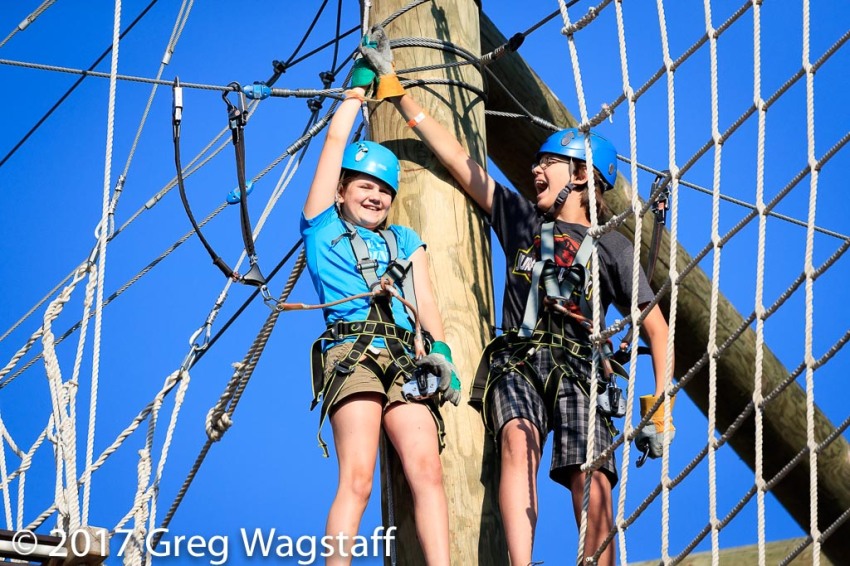 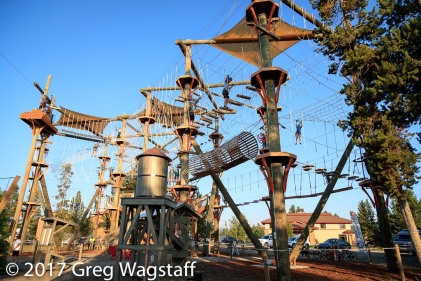 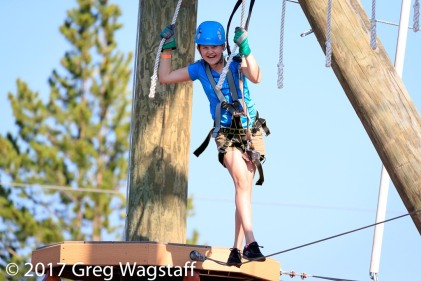 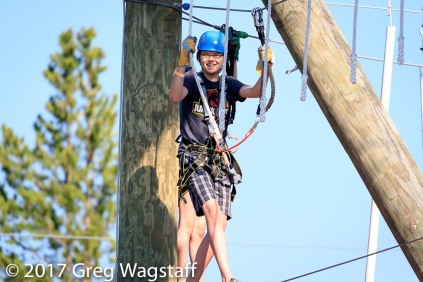 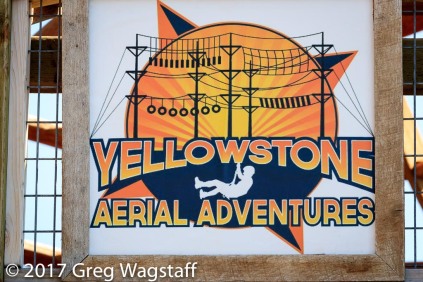 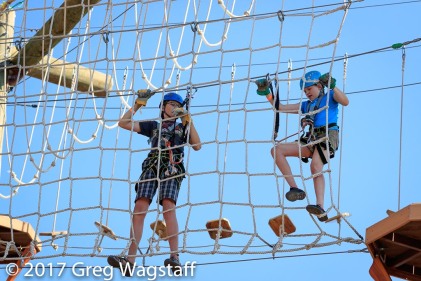 Cautious at first, Caden and Aly navigated the ropes course with teamwork and a celebratory high-five after a particularly challenging section. We watched in delight as the two flew across four ziplines at the top, connecting and disconnecting their flight gear along the way.  Rappelling down they headed back up again and again and again until they closed the place down. 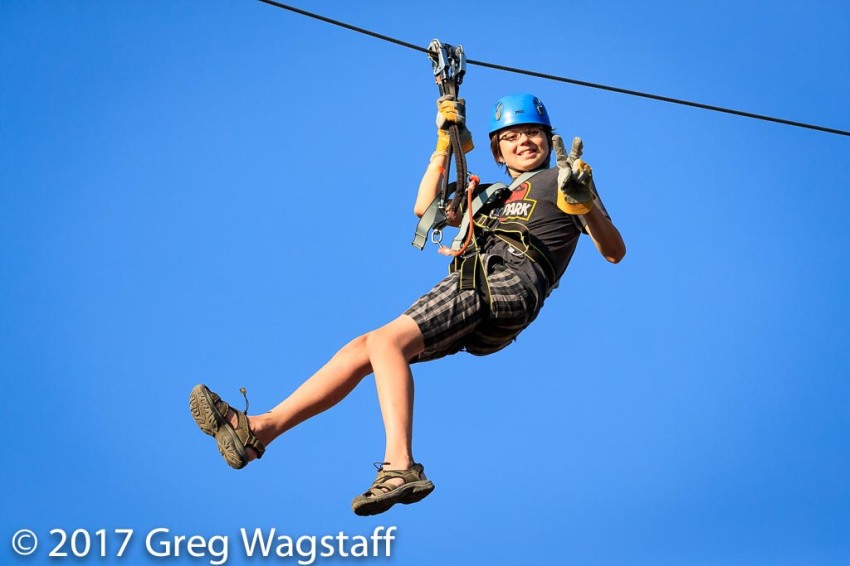 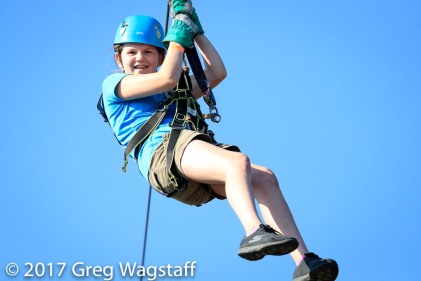 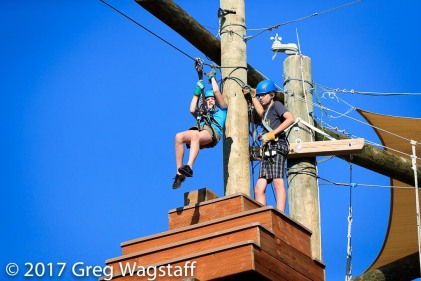 All too soon,our visitors headed home. Thank you Korri, Caden and Aly for a fun, memorable Yellowstone visit and for helping me see familiar sights with new eyes.