Like a scene from a Disney movie, Mama Grizzly stepped onto a vertical snow patch and skied down the mountainside on all fours. Her cubs followed suit and the crowds cheered in delight. It was one of nature’s rare glimpses into the wonders of wildlife. Spring in Yellowstone brings new life and the touching, hilarious, and sometimes sad antics of animal babies. 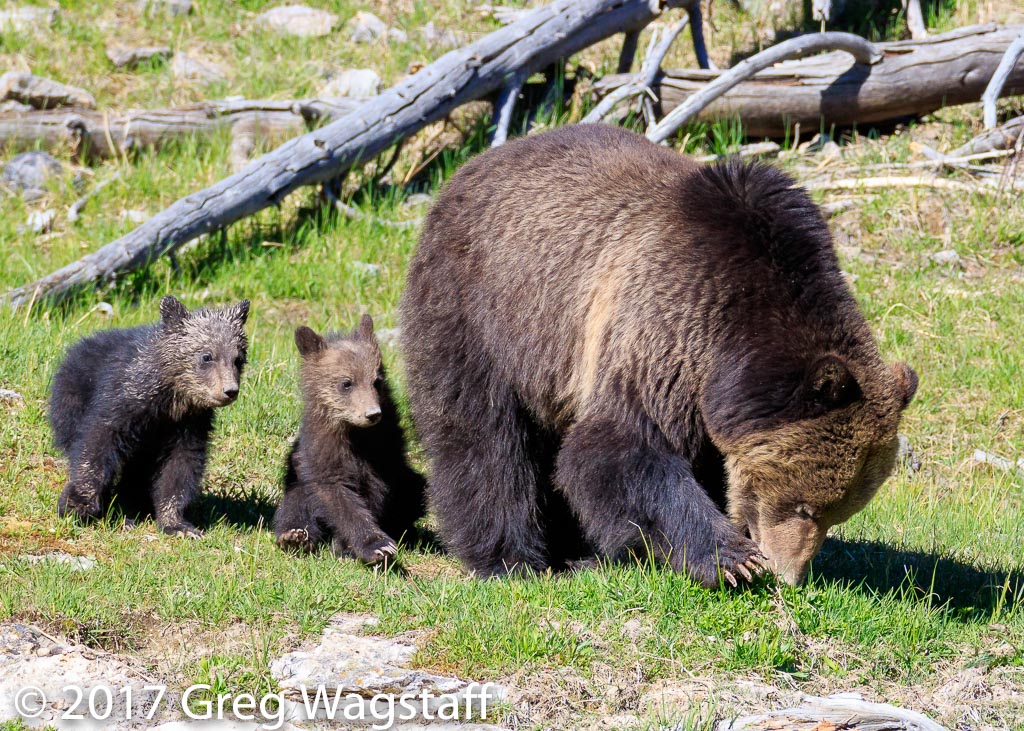 While Mama Grizz foraged for food, her twins tumbled and wrestled like kids, oblivious to the captivated spectators lining the riverbank. In a moment of realization, one stopped and stared at the audience as if to say, “You looking at me?!”

The other, its face covered in mud, seized the opportunity to land a well placed choke-hold and the scuffle ensued.

It’s easy to forget you’re in an untamed kingdom — merely a visitor, an observer, subject to the wiles of the wild. I love accompanying Greg on his photo safaris. For me, it’s all about the experience, the waiting, the anticipation, the wondering of what will happen next. Each wildlife encounter delivers its own unique story. 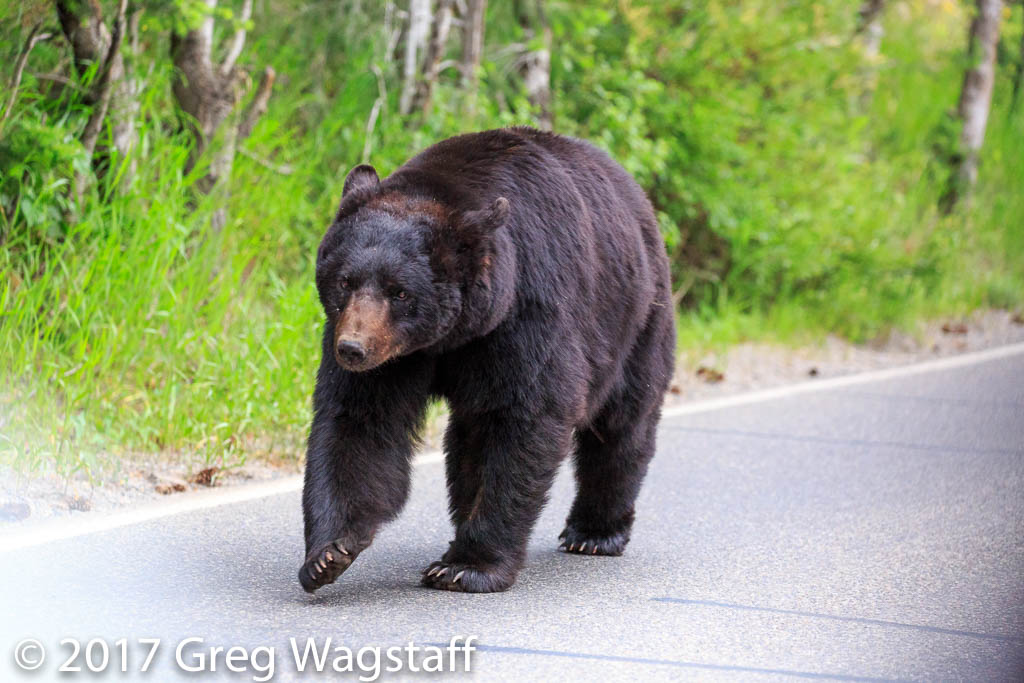 Two black bear cubs ran out of tree to climb and clung to the treetop, more than 50 feet above the ground. The tree swayed in the wind while the tykes shifted positions.  Mama Bear woke from napping on the lower branches, stood on her hind paws and scanned the meadow below. Her cinnamon fur shimmered in the sunlight. We arrived at the scene late and missed the earlier drama. A boar, on the hunt, pursued the cubs across the field and the twins scrambled up a Lodgepole Pine to safety. Conditions weren’t ideal for photography so Greg graciously offered his camera setup to fellow wildlife enthusiasts as a telescope-of-sorts so they could better view the bears. I cajoled (nagged!) him into taking a few shots despite the marginal lighting and distance! 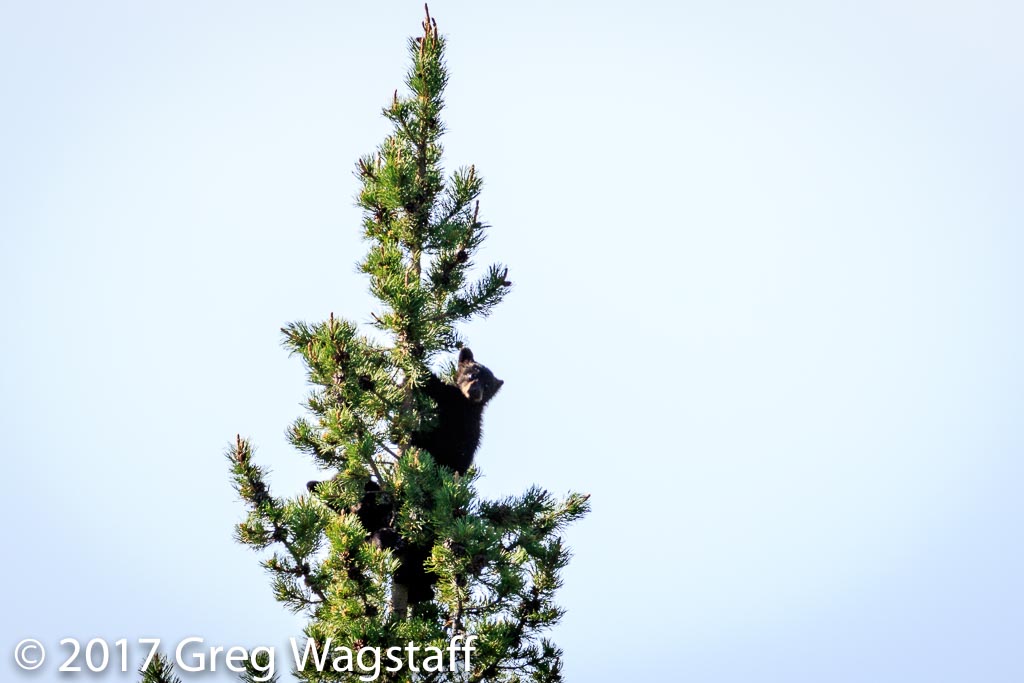 Moose are strange creatures and not particularly social. But, moose babies embellish all the characteristics of any youngster.  They romp, stomp and splash in the river with child-like grace. And, when Mama heads down river, they abandon their shenanigans and follow her. Usually.

Melancholy notes filled the air — a bleating, hoarse and shrill. “What is that sound”? I asked. “It’s a moose calf across the river”, Greg replied. I focused my binoculars on the calf. It appeared to be a yearling, wading in circles, clearly in search of its mama. We trailed it as it disappeared into the tall reeds and re-emerged in the shallows. Time passed. The crying continued.  We departed, feeling helpless and hoping for a happy ending. 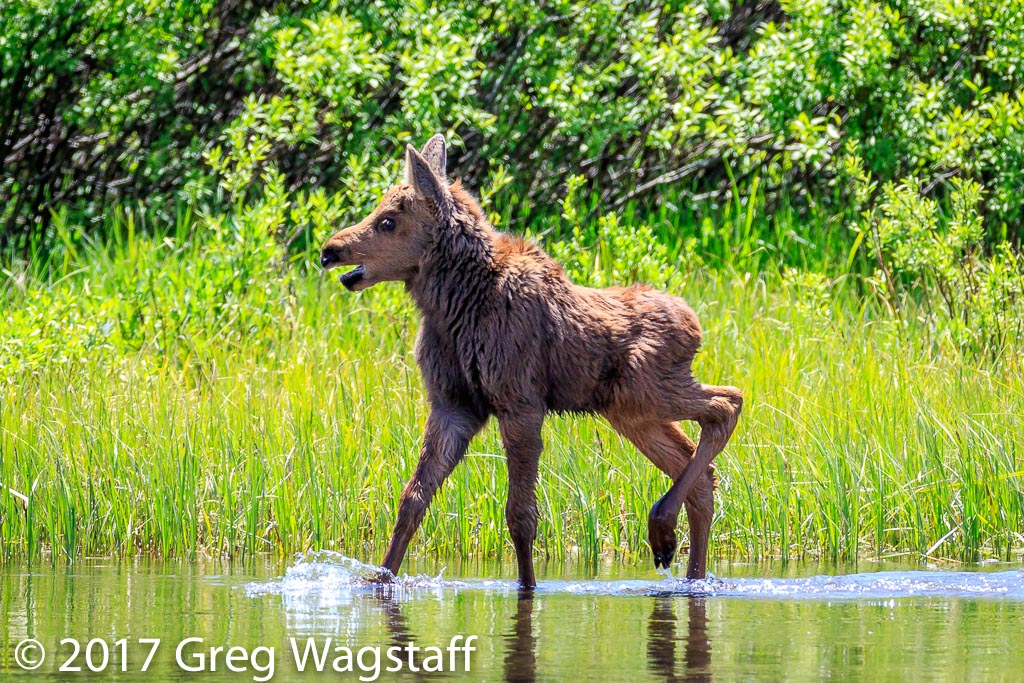 Rounding up the kids seems to be a challenge across most, if not all, animal species.  Like a carnival game, goslings paddled back and forth in the pond, almost bumping into each other.  I couldn’t help but laugh at Mother Goose’s failed attempts to corral her water babies and keep them moving in the same direction. In the end, Mama prevailed and the goslings’ swimming lesson was a success. 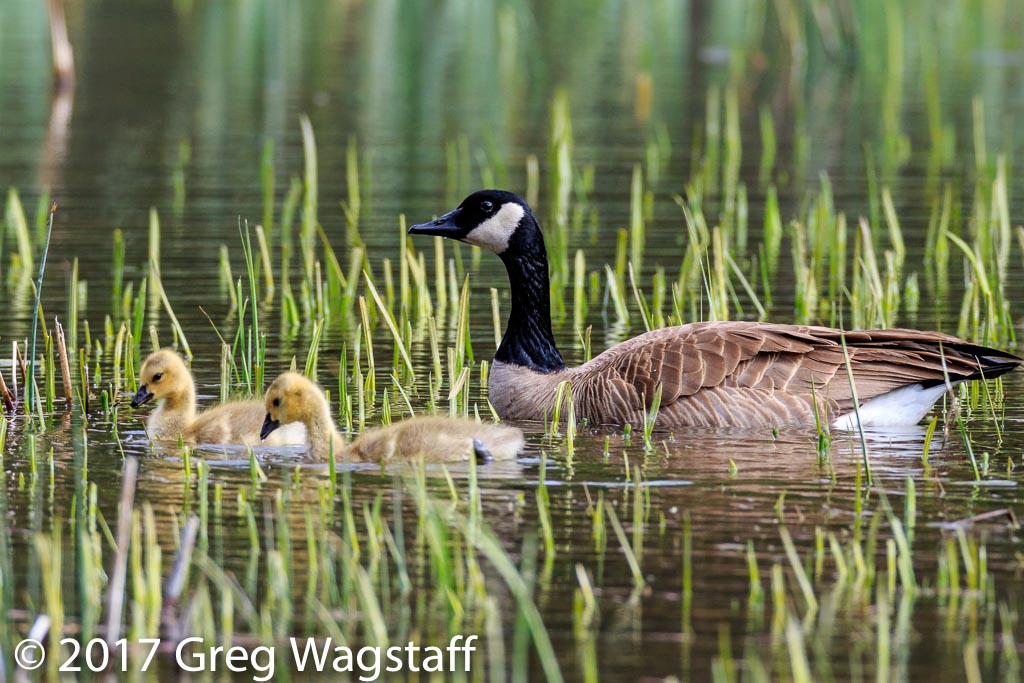 “Look at those big ears”! Greg chuckled as he setup his tripod. An elk calf peeked out of the brush, ears dwarfing its tiny face. Mama emerged from the trees and nudged her baby into the woods.  A few minutes later, the calf kicked up its hooves and galloped back, apparently playing a rousing game of tag until Mama put the kibosh on it.

As spring melds into summer, animal babies grow, their instincts sharpen to the realities of life in the wild, and guests, like ourselves, continue to marvel at the wonders of the untamed animal world.