After spending months in the Arizona and California deserts, Greg and I headed to the coast for a day.  A light mist curtained the rocky shores of La Jolla, California as the morning sun sparkled through.  I closed my eyes, inhaled the crisp, ocean breeze and gagged. “What is that smell?”, I gasped. Fellow visitors passed by with faces tucked into sweatshirts and fingers pinching noses.  Elbowing our way to the cliff’s edge, we found the culprits.  Harbor seals dotted the shore.

Cows (female seals) nudged pups into the water and swam circles while their young paddled to keep up. Some tired and crawled onto their mothers’ backs only to be dunked back in. When swimming lessons ended, the pups belly-flopped up the beach and collapsed on the sand.

A time-worn controversy brews between these cute, but pungent, marine mammals and the local community.  The cove, called Children’s Pool, was originally setup as a children’s swimming spot with a seawall, built in 1932, to defend the small bay from waves. Over the years, sand poured in and seals commandeered the beach. The pupping season runs from December through May and is a delight to see if you can weather the stench!

It’s also the season when the brown pelican dons its breeding plumage, transforming from plain to dapper.  Its throat pouch turns brilliant red and its nape darkens, an eye-catching ensemble.

The real mission for our day’s excursion was to find these gregarious sea birds and get them to pose for photos. The finding part proved easy as colonies congregated along Coast Boulevard’s shoreline path performing strange, yoga-like throat stretches.

With oversized bills, saggy throat pouches and stodgy bodies pelicans are funny looking creatures.  But when squadrons soar over the ocean in perfect formation, power and grace belie their comical appearance. 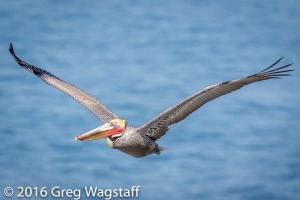 It seems to me that nature prods us to look beyond the obvious (even the smell!) and see the wonders of creation.