Kicking up his heels, the calf skipped quickly towards the road, clearly on a mission! Red hair blazing in bright sunlight as he weaved through his grazing bison buddies and headed towards our car. We stopped. He wobbled to a halt and Momma lumbered across the pavement past our car, pausing briefly to give us the “Don’t mess with my baby” scowl. 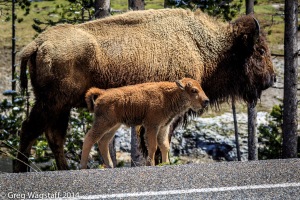 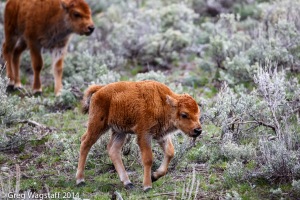 Easy to spot with their cinnamon hair, bison calves are born in late April and May weighing about 40 to 50 pounds. Tiny, compared to mature bison bulls at approximately 2,000 pounds and mature bison cows at 1,100 pounds. 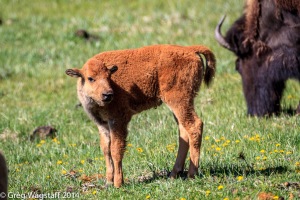 But don’t let their massive size fool you…. bison can sprint up to 35 mph or as Yellowstone states: “three times faster than you can run”! Calves are on their feet keeping up with the herd within a few hours of birth. Spring is the season to see these babies because within 3 months their red coats turn brown and they bulk up quickly, reaching about 350 pounds (females) to 425 pounds (male) within 6 months.

Yellowstone’s bison population ranges from 2,300 to 5,000, the largest on U.S. public land and they “own” park roads. Often stopping traffic in both directions charming visitors to hang out car windows with cameras-in-hand and frustrating others. Bison-car parades are common and, in Yellowstone, wildlife has the right of way. Isn’t that how it should be?

“In North America, both “bison” and “buffalo” refer to the American bison (Bison bison). Generally, “buffalo” is used informally; “bison” is preferred for more formal or scientific purposes.” – http://www.nps.gov/yell/naturescience/bisonfaq.htm