Fire in the Hole! USS-IOWA

Time for a mini-road trip to explore the area.  Destination:  the USS IOWA in the Port of Los Angeles, CA. 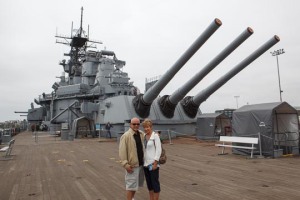 On Board the USS IOWA

She was launched in 1940 and designated as the “World’s Greatest Naval Ship”.  It was a nostalgic visit for Greg’s Dad.  He boarded the IOWA in 1952 in Hawaii when he visited a navy buddy serving on the ship.  With our own personal tour guide in tow, we spent two hours on the self-guided tour.  Papa’s recollections and information about life in the Navy back then, brought the old warrior ship to life.  Other tourists stopped to ask him questions and listen to his stories (I think they thought he was an  “official tour guide”!). 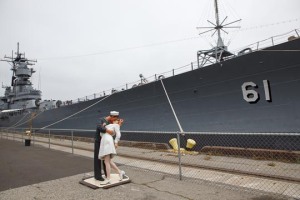 The original construction cost was $110 million and in today’s dollars would cost over $1.8 billion.  After 50 years in the Naval Reserve Fleet, IOWA became part of the non-profit Pacific Battleship Center and was opened to the public on July 7, 2012. 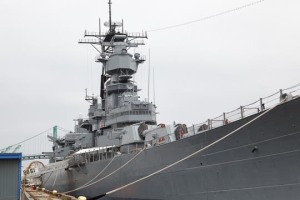 I am not a warship buff but I found this tour fascinating and recommend it as a “go to site”.  Along the tour, volunteers (many former Marine and Navy personnel) are stationed in specific areas to describe the ship and her history.  You can trek through officer’s cabins, the mess hall, the bridge, top decks, and much more. 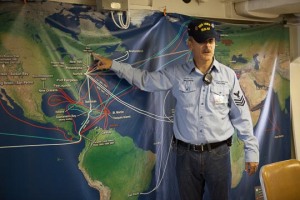 Some interesting facts from the brochure: “IOWA must be maintained in event of a National Emergency;  IOWA has the record for firing the longest ranged 16-inch projectile at 26.9 miles in 1989.  When fired, the 16-inch guns recoil 47 inches and contrary to popular belief, the ship does not move sideways.”  Not bad for an old lady! 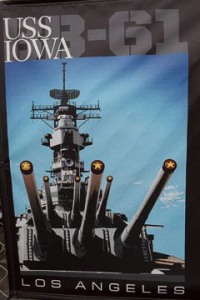